Opinion: Bayern Munich are going to win the Bundesliga, again

A classy 5-0 demolition of Schalke made it five wins in a row for Bayern Munich and leaves them a point off top. DW's Matt Pearson says it looks ominous for their rivals and Bayern will make it eight titles in a row.

In almost all of the last seven seasons, making the prediction in this headline at this time of year would have been about as bold as stating that night will follow day.

This Bundesliga season has been a little different. Four points separate the top four, Bayern have had to sack the coach that won them the double last year and a number of challengers, both familiar and unexpected, seem to have upped their game.

But Bayern's performance against Schalke was one of conviction, confidence, class and control - their best of this season and possibly longer. The swagger has returned and it could easily have been seven or eight against a Schalke side who picked off third-place Borussia Mönchengladbach last week.

The signs are everywhere you look on the pitch. Thomas Müller has been rejuvenated under Hansi Flick and timed his run in vintage fashion for his goal. Leon Goretzka, who scored the third with a brilliant scissor kick, is forming a balanced partnership with a refreshed Thiago. Alphonso Davies has been a revelation at left back, David Alaba looks like he's been playing center back for years and Ivan Perisic looks anything but a second choice. Robert Lewandowksi has never stopped being Robert Lewandowski.

Flick must take plenty of credit, particularly where Müller and Thiago are concerned, for returning Bayern's senior core to something approaching their best. But he's also enjoyed a few happy accidents, with the injury problems of Niklas Süle and Lucas Hernandez neccessitating the Davies/Alaba experiment. 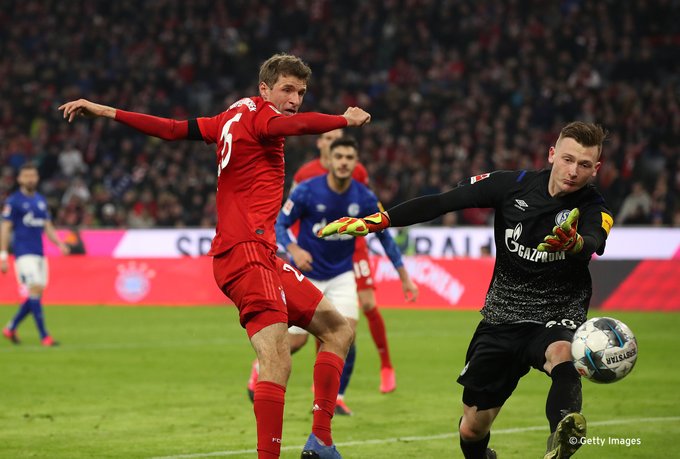 46 people are talking about this

Breaking down teams with limited ambition had been a persistent problem under Kovac but the Bavarians now once again look entirely comfortable on the front foot. Against Hertha Berlin last week they had to be patient but Lewandowski's early goal meant they could express themselves against the Royal Blues. That's now five wins in a row with 20 scored and just two conceded.

Of course, this iteration of Bayern is not perfect, nor is it at the level of the 2013 treble winners or Pep Guardiola's team and there will be much bigger tests to come both domestically and in Europe. But this remains a squad of serial winners and a club that expects nothing less.

Borussia Dortmund may have the man of the moment in Erling Haaland but they also have a defense that's as sturdy as undercooked souffle. Borussia Mönchengladbach have neither a killer goalscorer nor great strength in depth and RB Leipzig's young squad and coach have the ability but lack the experience.

The Red Bulls are the visitors to the Allianz Arena in two weeks' time and if Bayern can beat lowly Mainz in the interim, they'll go top with a win in that one however other results go.

I can't see them relinquishing that spot. It may not be good for the league or for anyone whose allegiances lie away from Munich. But Bayern are going to win their eighth Bundesliga in a row. At the beginning of the decade, Neuer was part of the last Schalke team to win a trophy, the 2011 German Cup. At its end, he's one of the most successful and influential keepers of all time. Neuer has become the first name on the teamsheet for Bayern and Germany, winning seven Bundesligas, four more cups, a Champions League and a World Cup. His sweeper-keeper style helped revolutionize the role.