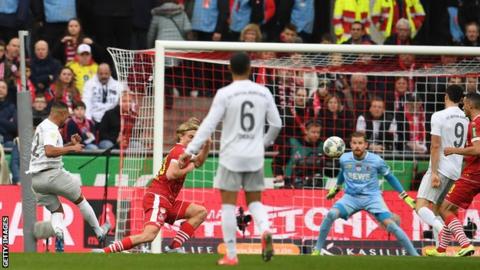 Bayern Munich scored three times in the opening 12 minutes as they blew away Cologne to go back to the top of the Bundesliga.Robert Lewandowski smashed into the roof of the net and Kingsley Coman then slotted home from 12 yards - both from Thomas Muller passes.Serge Gnabry expertly drilled home from the edge of the box in Bayern's best start to a Bundesliga game since 1973.Gnabry curled home from the edge of the area before Mark Uth pulled one back.Cologne caused Bayern plenty of problems in the closing moments but could not stop Bayern overtaking RB Leipzig by one point at the top.Lewandowski is only the second player to score 23 Bundesliga goals in the opening 22 games of a season.Bayern legend Gerd Muller reached that figure three times (26 in 1967-70, 23 in 1971-72 and 24 in 1972-73). PossessionHome39%Away61%ShotsHome13Away24Shots on TargetHome6Away8CornersHome1Away6FoulsHome12Away10 Home TeamKölnAway TeamBayern Munich
0 views