A gory accident on the Accra-Tema motorway on Sunday morning has led to the death of at least six people.The accident is reported to have occurred when a sprinter bus and a saloon car heading towards Tema crashed.

Citinewroom reports that one of the tyres of the sprinter bus burst and the driver lost control of the steering wheel hitting the saloon car in the process. 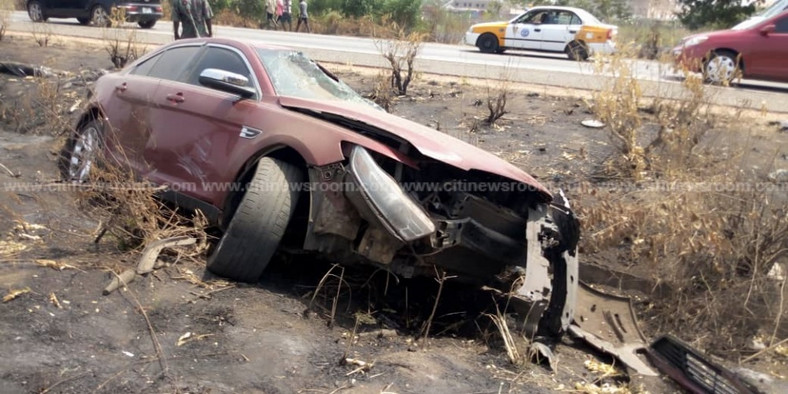 The saloon car involved in the crash (credit: citinewsroom)

At least six persons on board the sprinter are said to have lost their lives, but the driver of the saloon car was fortunate to escape unhurt.

“The red car was in front of the trotro. The trotro burst one of its tyres and was trying to control the car but a few moments later the driver lost total control of the car and hit the red car that was beside it. The red car went into the gully between the two motorways,” an eyewitness is quoted as saying.

“The trotro, on the other hand, somersaulted about three or four times before landing inside the bush on the side of the road. So, I got down and checked on the guy in the red car and realized he had survived so we asked him to go to the hospital. Some onlookers came and tried to pull people out of the trotro which was in the bush. We realized that about six people had died but I cannot give a proper account of the number of those that got injured, but it was very serious.”

The sprinter involved in the crash (credit: citinewsroom)

Meanwhile, the injured persons have been rushed to the Tema General hospital by the police patrol team that arrived at the scene.